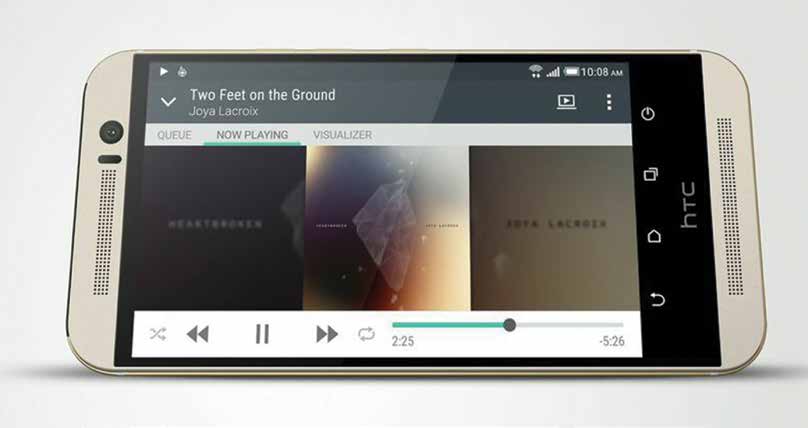 Preferred Magazine was recently afforded an exclusive sneak-peak at the new HTC One M9 smartphone before its official unveiling on March 1st. The following is what our tech savvy reporter had to say.

For the tech consumer, choosing a smartphone has become increasingly difficult. Manufacturers release a new flagship phone every year; sometimes waiting as little as six to eight months before unveiling their latest device. Add to that the growing number of companies pushing out quality products, and the consumer is faced with the daunting task of trudging through a sea of phone-tech to find the right fit for their needs. Well fear not tech weary consumer! One brand has made the search easier.

HTC has fast garnered a reputation in the industry as a quality brand boasting beautiful hardware and cutting edge software. A few years ago, the Taiwanese based company upped the smartphone game when they unveiled the One M7. With an aluminum unibody and powerful boomsound speakers, it was no surprise that the tech offering had earned the accolade, “Phone of the Year”.

Fast forward to 2014, and HTC again wowed the consumer market with the M8 flagship, a device that improved the M7 in all the right ways. Recently, the new and impressive One M9 was revealed to a tech hungry audience and since has asserted itself as the top candidate for ‘Phone of the Year,’ 2015.

Featuring an aluminum body and a familiar 5 inch, full HD (1920×1080) display, the M9 has defined edges around the device which should give the user more grip over the phone without compromising its beautiful design; a definite improvement over the seamless curved sides of the M8. With a scratch resistant coating covering the rear, it is to be expected that the M9 will be able to withstand more abuse than it’s predecessors.

After taking heed of consumer criticism, HTC removed the ultrapixel camera from the rear of the device, instead using it as a front facing shooter. This will allow more light in and offer better image quality for those who use the camera for ‘selfies’ or video calling. The rear camera has been upgraded to a 20.7 megapixel powerhouse, offering crisp pictures and video, rich with detail. This upgrade also opens up the possibility for 4K video recording, some of the highest quality video available.

A look under the hood reveals yet another big change. HTC has included the latest and greatest processing chip in the M9; the new octa-core Snapdragon 810 with Adreno 430 graphics handling and 3GB of RAM. The Snapdragon chip has two pairs of quad core processors clocking in at 1.5GHz and 2.0GHz respectively. This allows for faster navigation and more efficient power consumption, as the different cores operate under different circumstances. Not to mention that when keeping the device’s display at full HD, and 5 inches diagonally, there is not much processing power that needs to be used in pushing excessive and unnecessary amounts of pixels, thus increasing the potential for a long battery life.

While the battery life on the M8 is certainly impressive, the M9 takes power saving to a new level. HTC has bumped up the battery’s size, from 2,600 mAh to 2,840 mAh. Combined with the Snapdragon 810’s new size and power, the M9 can run longer before having to recharge.

Improving on one of the M series’ best features, HTC has integrated Dolby Audio into the boomsound speakers. This will enable the user to take full advantage of any media that uses 5.1 surround-sound, offering a more enjoyable listening experience. MicroSD compatibility is still available, allowing cards up to 128 GB in storage, adding to the base 32 GB built in.

The M9 comes equipped with Android’s newest iteration, 5.0 Lollipop, under HTC’s custom Sense 7 interface. Sense is definitely the better of custom Android skins, as it works with the user reducing bloatware and offering an experience that is far from frustrating. Sense 7 allows the user to incorporate unique themes and designs into the lock and home screens of the device, enabling more customized and intricate personalization.

The most exciting feature of Sense 7 is that it uses location to customize home screen apps. For example, a user who travels from home to work will see their apps shift from social media and games, to productivity software. The M9 is location aware and uses that location to better predict the apps that will be most useful, even going as far as offering suggestions for new apps that may better the user’s experience at that given location.

Tech talk aside, a week prior to the M9’s announcement at the Mobile World Congress in Barcelona, I had the opportunity to get an exclusive sneak peak at the device via an HTC representative who introduced me to everything M9. The device that I saw was unfinished, however the build and feel was mighty impressive. The M9 feels premium, and offers more grip for easier handling when compared to the M8. Pictures taken with the new 20.7 MP sensor were crisp and colour rich, and should give competitors a definite run for their money. And, the new features implemented into Sense 7 operated seamlessly and efficiently, utilizing the separate cores on the 810 chip. Sadly, I did not have the opportunity to test the audio from the boomsound speakers, but I have faith that HTC has improved the quality thus offering an enhanced listening experience.

Having won ‘Phone of the Year’ twice since the release of the M7, it should be no surprise if HTC takes it again this year with the One M9. Therefore my tech brethren, rest easy; with the HTC One M9 joining the smartphone race, they have made your device buying decision simple and clear.