Hailing from Saskatoon, Saskatchewan, Canadian actor Kim Coates is the personification of celebrity success, morphing from “that stage and screen guy” to international icon as Sergeant At Arms, Alex ‘Tig” Trager on the FX hit television series, Sons of Anarchy. “The ride was like lightening in a bottle,” said Coates.

With the final instalment of the thirteen episode, seasonal drama about a notorious outlaw motorcycle club intent on protecting their small town from encroaching thugs, corporate developers, and lawmakers in the proverbial ‘can’, the end of the road for Tig marks the beginning of a new wave of opportunity for the versatile Coates. The 56 year old actor with the piercing blue eyes, Coates sports a long list of stage performances and Hollywood hits including, Entourage; Waterworld; Pearl Harbour; Goon; and A Street Car Named Desire on Broadway. Following on the heels of SOA in which he plays a uniquely diverse character whose comic relief offsets his wild, violent, bloody nature, a new found appreciation for television as a medium for his craft has garnered the way for Coates to continue to grow as an actor. “My time is still coming,” he said.

Candidly grateful to have had the opportunity to play the crazy, killer biker “Tig” on SOA, Coates the man is a warm-hearted, down home Canadian boy whose endless generosity is much appreciated by the numerous charities that he supports. “I‘m so blessed with my charities and the things that I‘m doing on the side of my life with helping people out,” he stated. “It really warms my heart that I‘m in a position to do that.” 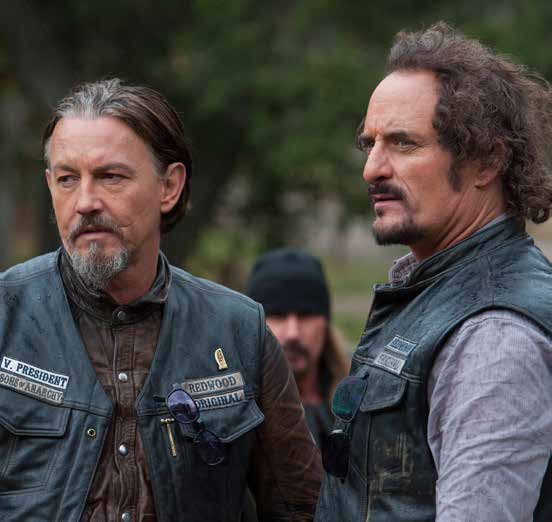 Preferred Magazine’s Samantha Chibani recently caught up with the actor in Toronto to delve into the persona that spans stage, screen and television, and to get the inside on the man who will forever hold a place in the hearts of SOA fans and “Tig” groupies. Introduction Written By Francisca Gambino 28 preferredmagazine.ca preferredmagazine

Q: So you just wrapped up the filming of Sons of Anarchy a week and a half ago, how were your emotions that last day on set?

Yeah, I’m still trying to process…and everyone said that it would be that way for me. I’ve filmed pretty much right to the end, whether Tig lives or dies. We actually had the series wrap party a week earlier, because so many of us actors were leaving immediately following the final curtain. Even though the wrap celebration was premature, the feeling of cast and crew together for one last time was amazing. Seven years together is a fucking long time.

Q: What was it like to play Tig Trager?

The original pilot needed to be reshot. They had recast Ron Perlman as Clay, Tig didn’t exist. They didn’t have a Sergeant At Arms. Three months earlier I had met Sutter to play Clay or Bobby, and I wasn’t right for either. Then that day in June 2008 I get 18 phone messages from my agents. My phone is never on when I golf. They wanted to see me that morning to discuss playing Tig. As it turned out even though I was 6 hours late for the meeting, I met and the rest is history. I was at work the next morning at 5 am. The first shot of this series for me was riding alongside Boone Jr. (Bobby) on my Harley. I will never forget it. 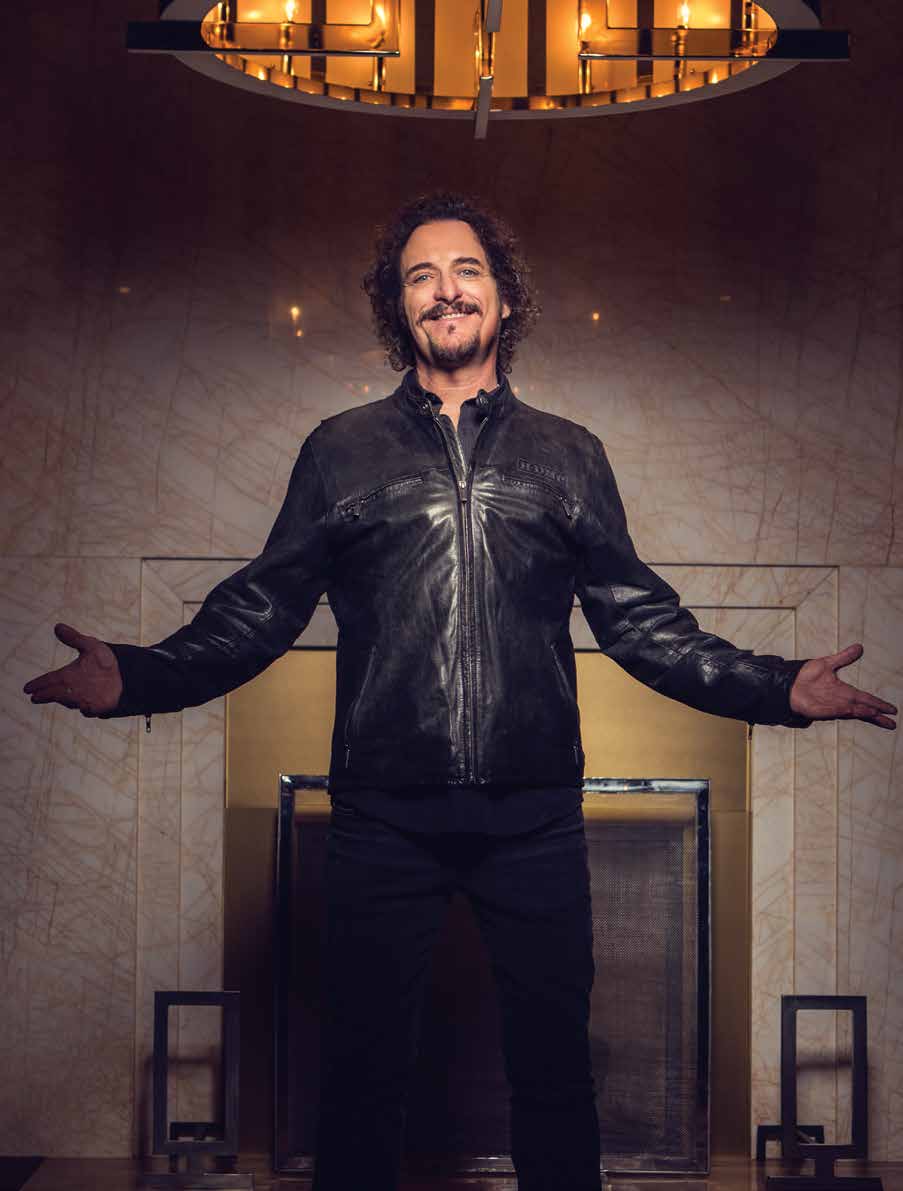 Q: Have you always been a biker?

I have, yeah. Bobby and I were the only two who had ridden before this whole series had started.

Q: You didn’t seem to have an interest in a TV series, what was it that convinced you?

Remember I have played many arcs on television; I just never wanted to be a regular at this point of my career. Before I agreed to play Tig, I said to Sutter in that meeting;” You have to show me something, a scene or something.” He didn’t have a lot yet for Tig, and what he had shown me was so dark and freaky, that I turned to him and said that this guy wasn’t for me. Sutter then looked at me with this odd, serious, calm face and said, “But Tig will be loyal, tough, funny, he’s gonna shoot first and ask questions later. He’s gonna laugh and cry at the same time.” There was a slight pause before he continued to say to me directly, “Let’s please discover this guy together.” I took that leap of faith and said yes. Seven years later I guess I’m really glad I did.

Q: You have had so many TV appearances and have been in numerous films over the years. You have always been sort of known as ‘that guy,’ and now you are Kim Coates, a household name.

Well maybe not every household, but I should be! <Laughs> I guess it’s the power of television, Samantha could you please explain that to me? Example: my best mate Billy Fichtner and I were at the Indianapolis 500 five or six years ago; as they introduced us to the crowd they mentioned some of our movies like, Black Hawk Down, Pearl Harbour, Waterworld, and Armageddon. There was polite applause, but when they mentioned prison break and CSI Miami the crowd went nuts; truly bananas. The TV audience sees you every week in their homes and gets super attached. SOA definitely put my name out there in a way like never before.

Q: You see now that there is this trend where so many movie stars are going to TV. What do you think is happening?

Great question! My career started on stage with 40 or so professional plays. These included Macbeth at Stratford directed by John Neville in 1986, and then I went straight to Broadway to play Stanley Kowalski at Circle in the Square. It was then that the movies started and haven’t stopped. But over the last 10 years or so all of the fences between film and television are gone. It is now truly about great writing. Look at True Detective. Harrelson and McConaughey, they hung for 4 months like a movie. There’s no more rules. Every week SOA is a small movie to me.

Q: Back to Tig, how do you get into character?

Did you pull anything personal from yourself for this role? Riding a motorcycle for sure, maybe his sense of humour and Tig is obviously a very sexy man. <Laughs> I‘ve never been a part of a real club, had no desire to. But once I had put that cut on all of the rules changed. Tig grew on me and I did my homework. When I saw De Niro in Taxi Driver I knew that’s what I wanted to do. I’ve continued to work on my craft for over 30 years. Some of these young actors today talk about method and don’t have a clue what it is or how to create a character. But what Sutter and I created in Tig was a buffet of emotions. In my opinion, there was never enough Tig in the series but when there was it was the best stuff. I’ll always be grateful for that.

“We fought and we loved each other. When we wrapped the season in November we couldn’t wait to get together again in May each following year.”

Q: Among the 7 seasons, were there ever any scenes that you had a really hard time with?

Gemma and Tig were having separate emotional issues leading up to the 11th episode in season two. In a closet Gemma comes on to Tig, they stick their tongues down each other’s throats and throw their bodies up against the wall. Suddenly Tig breaks it off. When I read that, I said to Kurt “A Sergeant At Arms would never do that with a club president’s wife.” Sutter then talked me off the ledge by explaining “This is a motorcycle club filled with sex drugs and rock and roll, lies and cover ups, it’s far from a perfect world and remember Tig is so lost from this scene that he goes straight to Opie to tell him that he shot his wife. Tig basically wants his life to be over.” When Kurt put it to me like that I realized he was right, but I was glad we had that talk.

Q: Did you research motorcycle clubs before this?

I got cast the night before start of filming so the answer is no. I had no facial or head of hair to speak of, and no knowledge really of motorcycle clubs, but I learn fast and I read a lot. By the 4th episode season one I felt I had a grasp of how to play this guy.

Q: The closeness you guys all have on set, how does it compare to what you have in real life?

Because this was my first regular on a series, I have nothing to base this comment on but we were like a total family. I mean it, no guff. We fought and we loved each other. When we wrapped the season in November we couldn’t wait to get together again in May each following year. This went on for 7 years can you believe that Sam…seven fucking years, I’m blessed. Our brilliant casting agent Wendy O’Brien would always tell us that all of Hollywood seemed to want to guest star on SOA. Our closeness had spread. I’ll put that comment in my pipe and smoke it all day long.

Q: What is on the horizon for Kim now that it’s all over?

I’m so proud of my charities and all the financial help and awareness we’re able to do. My time is still coming. I’m comfortable in my shoes now, because of SOA I’m a celebrity now I’m trying to be better at that. I’m open to television like never before. I’m free again to continue to produce and star in movies 52 weeks a year. It’s all good.

Q: Will you do Broadway again?

It’s been 25 years since A Streetcar Named Desire, it’s time to go back to NY and Stratford and how about the West End in London? Sam my kids need to see Dad on stage.

Q: Will we ever see Tig again?

I don’t know baby, this show was lightening in a bottle, fucking lightening in a bottle. They’re talking about an SOA prequel, in the 70’s with a young Gemma, Clay and John Teller. I wouldn’t be in it that obviously, but I’d watch it. FX is talking about movie, an SOA movie. We’ve all heard that before about successful TV shows but time will tell. I just want to put my feet up, run my fingers through my hair, crack a nice bottle and take it all in for a minute… So you know what Sam, that’s exactly what I’m gonna do.